Clambering around working on the garage I took a spill last Tuesday (9/18) and broke my ankle in three places. I’ve been having to get around the house on crutches.

I won’t even describe what I have to do to carry stuff up the steps to bed at night.

It is a beautiful day today. Friday I tried to go flying but there was so much haze from the fire up near Wyoming that it was just no fun. So I’ve been looking forward to flying today. But I can’t.

OBAMA is in town.

I have no interest in this. I don’t care if he wants to try to drum up votes from the students.

But because of him, I cannot fly. There is a stupid Temporary Flight Restriction over the whole city – Denver and Boulder. I think this is insanity. I’ve been told that back in the 40’s Harry Truman used to walk around on the street in DC. People would say hello. Now the President thinks he is a God, and that all the citizens in the country are serfs that he can just walk on. Probably not fair — it probably isn’t really him that thinks he is a God – it is probably all the retinue of fascists around him. And I guess it is true that there are a lot of crazy people out there who want to do violence. But stopping air traffic over the whole city? Isn’t that too much?


Today I flew N8132Y to the Lake County Airport in Leadville, Colorado. This airport has the distinction of being the highest paved runway in North America, at 9927 feet. The folks at the airport tell me that it is the third highest in the world, after one in Nepal and another in Peru.
It is a beautiful flight on a nice day, although there is no escaping the fact that flying through the mountain valleys you are going to get bumped around a little. For me, this is part of the challenge of learning to fly in the mountains. I have never quite gotten used to turbulence, even mild turbulence. Most of my flying has been over the plains, and all in good weather. If it is turbulent out, mostly I don’t fly (although my private checkride was an exception). But if you go over the mountains at the lower altitudes of these small planes, there are going to be air currents. You just have to expect it, and learn to keep your heart from jumping into your throat. After all, the wings are not going to fall off.
The second thing which makes these flights different is the requirement that you constantly be thinking about where you will put the plane if you have to make an emergency landing. Naturally this is way less of an issue in a turbo-normalized twin like 32Y. If I lose an engine, I have another, and with the turbos I can maintain altitude with one engine, and find a place to put down safely. But I’m still thinking about it. How far am I from surrounding airports? Is there a reasonable straight road around?
Finally, there is the excitement of trying to take off in a fully fueled plane, in August, at 9934 feet! Right now with temp/dp at 19/-1 and 30.46 inches, density altitude is 12,100! The runway is 6400′ for just this reason. Fortunately, with N8132Y’s turbos this isn’t really that much of a challenge, but for a normally aspirated engine 6400′ would seem awfully damn short. I wouldn’t want to try taking off today in a fully loaded 172.

Helped a local volunteer organization to build a website. They are Project Healing Waters – the Denver Program, and they help returning vets who have experienced some damage. They help by teaching the vets to fly fish, and organizing outings for them. If you are interested in the subject, see http://projecthealingwatersdenver.org.
As a thanks for the help, their head coordinator gave me a fly rod, and one of their other officials is giving me fly casting lessons, and has offered to take me Fly Fishing next week. I’m very excited about this. I’ve always wanted to learn to fly fish. It looks very therapeutic.

In an earlier post I mentioned that my early flight education inculcated me with a healthy fear of flying in the mountains, and that I’m trying to build up my confidence. I’m “stretching” myself, pushing myself. Two weeks ago I flew to Steamboat Springs, a charming little town in Northern Colorado. Yesterday I flew to Glenwood Springs on the other side of the Rockies. In both cases this means flying through the mountains. Glenwood Springs is quite a challenging little airport, nestled down in a valley with mountains all around. To get down to pattern altitude (7000 feet) I was descending in a valley southeast where the airport was out of sight, and then flying around this little ridge to finally get into the pattern. The final comes over a little river which creates some little downdraft. And of course this is only a 3100 foot runway. Plenty of runway I suppose, unless you are as inexperienced as I am. I’m landing the twin at blue line, which is 120mph, so if I don’t get it down pretty quick I’ll run out of runway, and the other end of this runway is not very accommodating to running over. Experience pilots would laugh at me. Bush pilots put bigger planes down in much smaller runways. But I’m still pleased. I’m pushing myself, and I’m learning. 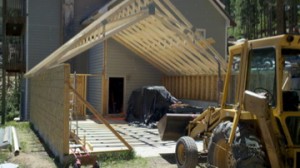 Been helping my friend Bill build his garage, up in the mountains. I’m 63 years old and out of shape, so doing physical labor for even a few hours at nearly 9000 feet, has proven to be a challenge. But it is coming along. Bill has the whole thing designed in Autocad, and really knows what he is doing. His grandson Josh and I are the hired help. We don’t know much, but we do what we are told. It is coming along.

Today was a little milestone for me. For the first time I took N8132Y over the divide, solo.
Of course I have been over many times, but always with somebody in the right seat. And Of course, what is the big deal anyway?
But when I learned to fly I was constantly admonished that flying in the mountains is tricky. I have known people who have died flying in the mountains. The winds can be difficult. I’ve had instruction from an accomplished mountain flyer, but still… every time I’ve gone up near the divide before there has been enough turbulence over the ridge that I’ve ended up turning back.
Today I went over. I was at 13,500ft, a comfortable margin over Rollins Pass. I flew on up to Granby, Colorado which is just over the ridge, landed, bought some expensive gas, and came back.
I’m very pleased.

Sites that I support